Honey Hive filler (yet to be written)

Princess Buelanan the Butterfly (びゅらなん ざ ばたふらい Biyuranan za Batafurai) is a young, anthropomorphic butterfly princess from the planet Niown.  She and her mother, Chexical, crash landed on Mobius and was discovered by Charmy Bee , who would later become her best friend.  She resides at Honey Hive Colony.

Buelanan only exists in the fan universe, appearing only in fanarts, and has yet to make a debut in fanfiction.   She does not yet have an imagined voice actress.

Buelanan was created by Yurakat1 of deviantArt.   After she deactivated her dA account, Buelanan was semi-adopted by PopfullaWriter and her character revamped.

Buelanan was born to the Butterfly Monarch on Planet Niown to King Frederick and Queen Chexical.  Unaware of her father’s abusive nature, she lived a happy-go-lucky life in her kingdom.

One night, she woke up to find herself and her mother on the run, escaping the planet on a cargo ship and leaving the solar system.  Her mother informed her that their kingdom had been invaded and they needed to escape to safety.  When the driver was distracted, Chexical stole the ship and drove it as far as she could, eventually reaching Earth/Mobius.  She ended up crash landing near Honey Hive Colony, and was spotted by Charmy Bee who rushed over to help.  Buelanan at first was too scared to leave her unconcious mother, but Charmy reassured her they would be okay, and she helped him remove her from the ship before it could explode.  Back at the colony, Buelanan explained to Queen Bea where she was from and why they left, mimicking her mother’s words.   Bea allowed her and her mother to take refuge at Honey Hive.

Later, after Chexical revealed the situation of Honey Hive to Similijo at Yellow Jacket Empire, the hornets invaded once more.  Chexical, realizing her mistake, put Buelanan on an escape ship, sending her out before she could be captured.  Buelanan somehow managed to input the Chaotix Detective Agency in the GPS and the ship automatically led her there, where she crash-landed near their house.

Unfortuantely, she was followed by hornets, who attacked the Chaotix in order to bring in Prince Charmy and Buelanan.  While Vector, Espio , and Mighty held them off, Charmy and Buelanan took cover in the woods.  They were eventually found by hornet soldiers and were about to be taken in, when Sonic and Tails came in via the Egg-Wasp, scaring the hornets into retreat.  Charmy then asks them to take him to Honey Hive Colony, as he knows his mother is in danger.

Charmy and Buelanan separate from Sonic as soon as they arrive.  Once they find his mother, Buelanan decides to create a diversion in order for soldiers to chase her and Charmy could get to Bea.  Buelanan is grabbed by Chexical and they hide in a closet, safe from the hornets.  Unable to forgive herself for her betrayl, Chexical chooses to commit suicide, but planned to take Buelanan with her, all while the little girl is unaware of what her mother is about to do.  Before Chexical could kill her daughter, Vector and Mighty open the closet door, seeing the crime Chexical was about to commit.  Vector grabs Buelanan and gets her far away, while Mighty tries to wrestle the knife out of Chexical, but is unsuccessful…

Buelanan believes Chexical was a casualty of the invasion, as nobody wants to reveal to her the truth.

King Frederick is finally able to track down where Chexical and Buelanan ran off to, and sends his ships and forces to Earth/Mobius to get them back.  To avoid tension and war, Queen Bea is forced to tell the truth about Chexcial’s fate, and also reluctantly hands Buelanan back to him.

At some point, before they leave the planet, Buelanan faces the wrath of her father and is even struck by him.  At that, she finds a way to escape and makes her way back to Honey Hive and Charmy, who hides her from his mother.  The colony is surrounded, however, demanding Buelanan be returned.  Charmy and Buelanan sneak out of Honey Hive, but are caught by King Frederick’s soldiers and brought onto the ship.  Frederick saw this as a betrayal of Bea’s word and proclaims he will also take Charmy with him to Niown.  Bea pleads for him to return Charmy, and even offers herself as a sacrifice and be his new queen.  Frederick takes her up on that offer, returns both Charmy and Buelanan, takes Bea, and leaves the planet,  thus ultimately abdicating Buelanan as heir. 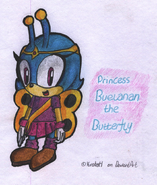