Charlotte is a 15 year old dingo with pointy ears, a blond colored coat of fur, and long hair (the same color as her coat). Her eyes are an icy purple and she normally wears a collared shirt with a sweater vest, bowtie, and skirt. She also wears leather boots and gloves that extend to the middle of her forearms in most situations. In colder areas, she may also wear a longer sleeved shirt as well as pants. She is also a fan of hats. Even though she only pulls it out in privacy, she also has a golden locket with pictures of her father and mother on the inside.

She's a hard worker and eager learner, feels as if her life is a blessing and will do anything to protect the people close to her (Such as Rugal and the Paramount family.) However, Charlotte has a bit of an attachment issue, meaning that she’s shy on her own and gets lonely very easily. She still does not fully understand the world she is living in, and thus has a rational fear of the unknown. This does not mean she is a coward. She will fight with passion to protect her new life and the people she holds dear, because she would do anything to avoid a repeat of what happened to her old family. Her shyness does not always necessarily mean she is unsociable either. She has learned that in a safe environment, such as a school, people are friendly most of the time. However in public, she has a very tight personal bubble.

Back long ago, during the 19th century, the majority of people were strong believers of superstition and myth. This fact, plus the introduction of new technology eluded people, and were even scammed by machines hidden under magic. In the parlors and bars of the city, fortune telling was one of the most popular rip-offs, but imagine for one minute if such an idea actually existed.

The Karengton family was a twinkle of truth in a market of pretenses. Their family trade dealt with serious magick, contracting both angels and demons in the plight of granting a client’s wish. Anything (that didn’t mess with the natural order of things) could be granted, but because of this power, the Karengton family kept their business in the dark, requiring appointments as well as never having a set location for their magickal work.

With this in mind, Charlotte, a fifteen year old girl, had finished her training within the magickal arts and was taught how to negotiate with spirits. She learned that in most cases, a demon would want an object or a host to take over while an angel would want a good deed in return for their service. Her family believed that Charlotte was ready to take up the family business, and on a fateful June evening, she was given her first client, A young man who went by the pseudonym of “Vesuvius”.

While pseudonyms were common when it came to the Karengton’s business, this man was actually Antoine Ives, a member of the fundamentalist organization known as “The Black Cross.” Their mission statement was “To rid the world of heathens and hypocrites.”  Neither Charlotte nor her family was aware of the man’s actual intentions, so Charlotte didn’t see anything suspicious about the man wanting a certain angel. Ives claimed that it was his guardian angel he wanted to ask for the future to work out in his favor, but he could not care less about an event changed in the future through magick, he wanted to wipe the Karengton’s name out of existence.

While Charlotte meditated to find Ives’ guardian angel (which kept running away from her to stall time) Ives was channeling powers of his own. Using a strange, green emerald he held in his pocket, Ives’ whispered “Chaos abyss”, causing an explosion of light to blanket the town. With this technique, the Karengton family was wiped from history and everyone’s mind, all except for Charlotte.

A powerful magical-shield spell that was secretly placed on her by her guardian angel protected Charlotte from death and amnesia. However, Chaos abyss was still powerful. While the spell warded off death, Chaos abyss shattered the shield entirely, leaving her open to future attacks. It also took away Charlotte’s ability to use more advanced magic. The temporal effects of chaos abyss (wiping out all traces of the target in the past and present) also has a strange effect. It inexplicably forwarded Charlotte into present day. The location of Charlotte’s meeting with Ives just so happened to be the same place as the home of Rugal Paramount, a Polar bear child that was adopted by a rich family. As Rugal and his parents were taking a stroll to the nearby city for lunch, there was a huge flash of light, and were presented with a girl dressed in fortune teller’s attire, sobbing for her parents.

As soon as Mrs. Paramount was able to calm the girl down, a missing child report was filed, but police in the area has absolutely no records of a “Karengton” family in this town. While Charlotte swore that this was the same area she was raised in, it seemed much more different wondrous. The streets were all paved, large automated carriages zoomed down the roads, as well as many other things. Once she figured out the year, Charlotte nearly went in to shock. It seemed almost impossible to both Charlotte and the Paramounts that she has traveled such a gap in time, but feeling sorry for the girl, the family took her in to raise as an adoptive child. The Paramounts were certainly rich enough to afford taking care of another teenager, so they were happy to include her as a member of the family .Still, Charlotte hated to inconvenience the family, so she insisted on becoming a maid and working for a place to stay.  With a new life ahead of her, Charlotte was ready to start again,and possibly find a way to resolve her issue and mend the tragedy that befell her kinfolk.

Charlotte is not a melee fighter by any stretch of the imagination. Her knowledge of modern day weaponry is limited as well, meaning that she does not use guns. This means her primary defense mechanism is her magic. Most of her spells are “area of effect” meaning that instead of a projectile, her abilities surround her in an aura-like manner. This means that even though she is bad at fighting at close range, she has to be at somewhat close distance in order for her to make contact. While a normal person could not punch or kick her from that distance, the gap between her could be closed easily and she would be susceptible to longer ranged weapons or abilities such as firearms, pole arms, and magic.

Charlotte's main way of keeping herself out of harms way is separating herself from an enemy. Her abilities are mainly used to keep everyone else safe, because she is not skilled in close combat.

Charlotte conjures a magical, sweet smelling vapor from her umbrella that diffuses into the air around her.  This possibly relaxes both her and her allies, possibly calming them down and letting them focus.

This is the only ability Charlotte has at her disposal to separate herself from an opponent. Charlotte opens her umbrella and channels her energy through it. After a few moments, the crystal on top of her umbrella will start to glow and enemies that have gotten too close (about ten or eleven feet) will be blown back. While this abilities only sort of cool-down is closing, channeling energy, and re-opening the umbrella, an agile enemy could use that time to re-close the gap and start fighting her again. The activation of this ability may be strong enough to knock enemies back, but its activation only lasts for about a quarter of a second

Charlotte swings her umbrella from one side of her body to another, creating a crescent shaped wave of light that can be used as a temporary shield. Over a period of about two seconds, the lights fades away, but during that time, any attack that hits the starbeam will cause it to detonate, causing a painful explosion of multicolored light that can knock most light-medium weight opponents to the ground. The blast will not affect Charlotte, but the starbeam itself does not shield Charlotte entirely. Depending on the angle she swung the umbrella, it can block other slash or swing type attacks, but stabs, punches, and well-aimed bullets can hit her around it. If a projectile attack hits the starbeam, it will detonate, but if the attacker in not within a relatively close range of Charlotte, it will not affect the them.

This is Charlotte’s only projectile attack. Charlotte points her umbrella at her target and fires a purple, fireball-like, projectile at her opponents. The attack itself has a diameter of about 8 inches and it travels nearly 10 to 20 feet, depending on how much energy was put into the attack. This energy does not increase the diameter or offensive power of Kinekoujin, just the range.  It travels moderately fast through the air, but can still be dodged if an opponent is paying enough attention. On contact, it hits the enemy with the force of a fastball pitch, however, if it comes in contact with other projectiles, it will only neutralize said projectile if it is weaker and will dissipate the attack. It will not neutralize melee weapons, but it will still strike with significant force, possibly distracting, disorienting, or even disarming an opponent.

- If Charlotte was to ever come in contact with the power of a Chaos, Hyper, or Master Emerald, it would cause her significant pain. This is a result of the many contracts she and her family had made through magickal deals in the past. She is completely unable to use the power for any ability. This means that any enemy who attacks her that has the power of an emerald will hurt her even more.

- Her theme song is Changes by Eminence and Red Moon ft. Holly Drummond 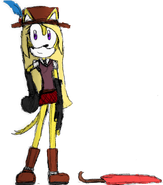 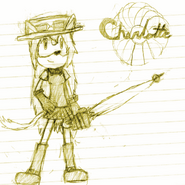