Her friends, fighting, sleeping with her security blanket, horror movies

I'm Courtney and no one can match my strength and cunning! "

Courtney the fox (sometimes shortened to Courtney Fox) is a bounty hunter who first appeared in Sonic ultimate heroes alongside Amber the lynx. Her name is an unintentional parody of actress Courtney Cox.

Courtney is a mobian fox with light purple fur and a white muzzle. She wears orange pants, white shoes and a dark gray turtleneck with a large heart on the center of it. The tip of her tail is white while her eyes are an amber brown and her hair is ocean blue, always held back in a ponytail.

Courtney is incredibly strong despite her initial appearance. Her punches can destroy solid steel and her kicks are powerful enough to stop a moving vehicle. She has even shown to be strong enough to go up against other powerhouses like Knuckles and Omega. No one is exactly sure how she got so strong, not even Skye or Amber.

Courtney, being a bounty hunter, thinks of money more than anything else. The exception being Amber who is like a little sister to her. While not as ruthless as her teammate Skye, Courtney clearly has a meanstreak in her own right, getting a reputation as being one half of the best bounty hunting duo. She also can be a bit sarcastic, shown when Amber asked if Eggman was building a new machine, to which Courtney replied that Eggman was now in the ice cream business.

Life on the streets

Courtney has no remembrance of her parents or her childhood, she only remembers spending her teenage years robbing other people just for fun. One day, she defended Amber the lynx from a group of thugs who were tormenting her for her large ears. The two then agreed to become a bounty hunting duo to gain more money for the things they want.

Courtney and Amber appeared together in Sonic ultimate heroes, attempting to ambush Skye Flowers because they believed she was an outlaw. Their mission failed, the duo attempted to leave, but was stopped by the hedgehog who believed that the three of them could find Eggman and whatever treasure he had together, forming the trio of Team Bounty on the spot. She and the others went to an ancient city in ruins and confronted Eggman tracking the chaos emeralds. They were able to defeat the scientist and arrived at a retro city shortly afterwards. Courtney easily deduced that Eggman was stealing energy from the city and Skye proposed it was now their job to stop him, with Courtney nodding in agreement. They were able to destroy the robots and Courtney joined Skye in a three-on-three fight with Team Dark. When the fight was over, they found themselves at a casino like area and rushed into it. Courtney found the chaos emerald in one of the buildings and joined her team in a fight against Eggman. Although he escaped, they were able to find a secret base in a canyon region thanks to Amber's sense of hearing. While Skye and Amber dealt with the Egg beetle, Courtney was able to find some secret files that contained a new machine that could destroy their home. She followed Skye to an island and destroyed a large army of mechs in order to obtain a chaos emerald they were guarding. Courtney and her team then heard Cream's voice and joined Skye and Amber in a fight against Team Rose, with her taking on Big the cat. Sometime afterwards, Courtney asked why Skye didn't fight Cream, even though she was an easy target. Skye simply replied that she liked kids, to Courtney's understanding. The trio found themselves on a beach and encountered a horde of robots trying to find a chaos emerald, amusing Courtney to an extent. Finding the chaos emerald, they finally reached Eggman's underwater base and encountered him before fighting him in the Egg cobra. After Super Sonic defeated Eggman's ultimate weapon, she is seen with Amber asking when they'll see Skye again.

Courtney made her second game appearance in Sonic: the final frontier first as one of the many victims who died in a post-apocalyptic future brought up by Eggman. She appears later in the female story campaign when Skye asks Amber to find her and bring her to the future they were in. She separates a fight between Skye and Marilyn and gives chase when the murderous porcupine flees back to the past. Courtney demands to know what's going on when Marilyn hides in plain sight in order to avoid Team Bounty. She encounters Muse at Emerald Beach and brutally beats her until she reveals everything about the future they were in. Marilyn, though beaten by Courtney, only laughs and tells the fox that she and Skye killed each when the hedgehog went rogue and she (Courtney) tried to stop her. Angered and devastated by what she heard, Courtney delivered a powerful kick to Marilyn's chest and threatened to make her left eye match her right if she didn't leave her sight immediately. Muse laughed and disappeared from the area just as Skye, Amy, Amber and Sally arrived at the scene. She, Amber and the other main members of the female campaign encounter Marilyn in a temple in the desert and fought against her valiantly until Eggman rescued her from anymore beatings. Courtney and Amber were present in the final story campaign when Sonic, Shadow and Silver transform into their super forms to face off against the Egg Titan.

Courtney is one third of the bounty hunting team with two of the best by her side.

Courtney shares some respect towards the government, mostly because of Skye's crush on the ultimate life form.

Courtney views Team Rose as nothing more than amateurs and proves that she's the superior fighter.

Courtney is definitely determined to prove she can destroy the Eggman empire. While she doesn't have a specific vendetta against Eggman himself, she does have a strainful relationship with his ultimate soldier, Infinite. She does her best to fight against the two and makes sure no one gets in the way of that.

Courtney and Marilyn do have a disgruntled hatred towards each other (mostly because of Courtney's friendship with Skye.) Courtney's hatred for the porcupine goes to where she's at the point of actually killing her in a fight, only for Skye and Amber to stop them time and time again.

Courtney was once romantically involved with a fox named Elliott to the point where they made out in public. Courtney seemed embarrassed when Skye and Amber found out, but easily forgave them. It may be possible that Courtney and Elliott are still dating each other evidenced by the love letters she often gets.

Courtney as a child crying tears of anger as her mother walks away. 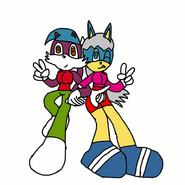 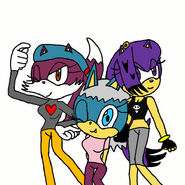 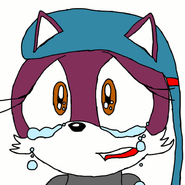 Courtney's tearful response after learning why her mother left her