Death the Hedgehog is a hedgehog sonic fan character owned by Kevster823.[1] He's classified as character #20 based on the owners character list.

Death was created by Mobian Reptile as Gigi’s (her previously owned oc) shipping partner. He was put for sale due to the owner unable to use him more often as before and was bought by Kevster823. He also got Death’s daughter Ryann the Siren Hybrid for free along with the purchase of Death.

Death is scheduled to appear in the World of light comic along with other characters, that Kevster823 owns, in order to stop Galeem and his spirit army's to take over the world. It's currently unknown what role he will portrayed in the comic. 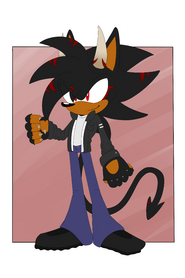 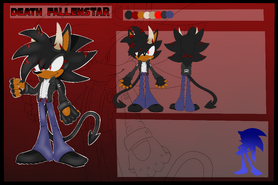 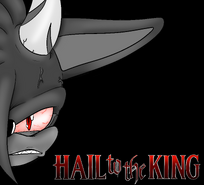 Death in a Avenge Sevenfold Hail to the King album cover
Add a photo to this gallery
Retrieved from "https://sonicfanchara.fandom.com/wiki/Death_the_Hedgehog?oldid=475931"
Community content is available under CC-BY-SA unless otherwise noted.