The inspiration for this came from Bleach with some Sonic Heroes themes mixed in as well.

Under the leadership of Apocalypse, the Demon Legion was led to victory in the subjugation of Planet Mobius. Many lives were lost in the confusion as billions of mobians and humans scurried for safety; hordes of innocents were either captured or killed. While the remaining inhabitants that could escape, fled to planet Rabba. A few thousand brave souls stayed behind with the intent to win back their infested home planet, and for the next 24 years, they rebelled against the hundreds of billions of demons that dominated the planet.

Several of these soldiers include Miles, Cabara, Kalus, Sarah, Shadow, Knuckles, Medusa and so many more. They are members of a once secret subdivision in G.U.N. known as the Demon Slayer Organization, or D.S.O. for short. They exist for the sole purpose of ridding Mobius of the vile, nocturnal monsters that rule it; they do this by not only fighting them, but studying and understanding how they work. There are 7 classes in this organization, 3 of them are in the military division, one for Research and Development and 3 more classes for the medical division.

The first 3 classes are the military division, each military class is headed by one speed type captain with his/her first and second lieutenants respectively taking the positions of technique and power types; and each class has a large number of teams that follow the main one, at least 50 other teams with 3 members in them as well. The three classes at the moment are: Neo Dark, King's Knights and Freedom Fighters. The primary task of these classes is to assemble teams of capable warrior to hunt down and slay demons; systematically weakening their grip over the planet until they're ready for one final assault to wipe them out. While the military division's primary objective is to slay demons, they also hunt down and bring back valuable resources for R&D to experiment with; either creating new tools to use in the field to help in their fight against the demonic horde or developing medicine for the med teams to use.

The R&D division is led by Dr. Miles Prower, yes Tails, in its mission to study the invaders in order to develop various weapons and tools to use against them. The research has yielded promising results such as using solar energy and chaos energy to create weapons that would be effective against the hordes. From mass producing daggers made from crystalline chaos energy to U.V. flash bombs; even now the department is developing a new device that's rumored to revolutionize super forms. They also share certain resources with medical division to improve the efficiency of healing the military division's agents.

One of the medical division is led by Amelia Rose, these classes deal with any medical situations that may arise. Anyone who specializes as a medical professional, may choose to work in one of these 3 classes to help soldiers heal so they can live to fight another day. Amy in particular leads Class B of the Med. D. where other prominent doctors and healers such as Harmony, and Jordan work.

Everyone has an Ability Type, but few actually know what their type is. Agents in the DSO can discover whether they're a speed type, technique type, or power type. Now, how does someone learn what type they are? By taking an Ability Type Evaluation test, ATE test for short, where an agent is put through a series of events that test their mental and physical fortitude; at the same time, the proctors overlooking the test, evaluate how well they deal with them. Afterward, depending on certain factors, that individual is scored on a scale of 1 to 7 for each type and is assigned one of the types depending on which one they show the most proficiency in; when all is said and done, they will receive a brand that symbolizes their type. Generally speaking, these are how the types relate to each other: speed > technique, technique > power, and power > speed; but the reverse can also be true, given the right circumstances. If character A is a speed type and character B is a power type, then B would normally win; but if character A has similar or greater strength and stamina compared to character B, utilizes their intelligence more effectively, or their speed is too great for the power type to matter, A can pull off a win in the end. Certain individuals have corresponding elemental affinities with their ability types as well, and can learn certain moves that other types either can't learn (outside of special circumstances) or can learn but to a lesser extent. Here's a list of characters in their respective ability type categories along with some specifics on each type:

Quick and agile with a modest level of skill, but not a lot of raw power though; this makes them somewhat vulnerable to power types in terms of combat. Individuals with this ability type have an affinity for learning moves that utilize high-speed movement; and because of the type's affiliation with the wind, they can also learn moves that manipulate air currents. Some of these moves include a plethora of spin attacks like the Homing Attack and Tornado Jump. While they can learn the move Thunder Shoot, they can only stun their targets at best; and unless they have pyrokinesis or a great deal of strength, it is unlikely that a speed type can learn power type moves. The faster the user is, the more potent their speed moves are.

Tactical and skillful, with fairly sturdy bodies to boot; but their speed is their least developed quality. Meaning speed types will have the advantage over them. Technique types generally have an affinity for electrical moves like Thunder Shoot; and due to the nature of this type, they can also learn and develop a larger variety of moves; this is either accomplished by the user combining moves or creating technique variants of speed and power type moves. These moves tend to have special abilities or haxes that can be greatly improved upon even if the user doesn't physically get that much stronger.

Strong in body and will, they have a ton of stamina; while they may be pretty fast, they often have blunt fighting styles that show they're not very tactical. Therefore, technique types can beat them. A power type can learn moves where physical might is the key to its effectiveness, like the Hammer Punch; and they can learn various moves that use fire, such as Fire Dunk. They also have the potential learn certain speed and technique type moves, given the right circumstances.

Recruits in the Organization

Characters from other creators who have joined the fight; you can join too by visiting the Recruitment forum below.

In order to combat the demon hordes, they must be physically capable of keeping up with them; to this end, they undergo numerous chaos infusion experiments to improve strength, speed, and durability by magnitudes equal to the Chaos Emeralds.

Those who have successfully undergone the experiments are capable of using chaos energy at will. This allows them to use various chaos powers affording them increased physical prowess, matter and energy manipulation, space-time manipulation, and more.

There are some individuals who are capable of utilizing solar energy as a weapon, making them a major threat to the demon hordes. These individuals can fire projectiles, heal wounds, fly, erect barriers, and so on using the power of the sun.

Certain members undergo combat training in order to actually be able to fight the demons; they learn conventional and unconventional methods of handling their demonic adversaries. Either through the use of hand-to-hand combat, weaponry that uses chaos or solar energy, or magic.

With some of the greatest minds in the universe developing their weapons and other gadgets, this group has some pretty advanced tech to work with. Tech capable of replicating the effects of magic; creating swords that can cut through space-time, restraints that can contain higher dimensional beings, guns that can fire condensed stars and armor that grants someone a super form. 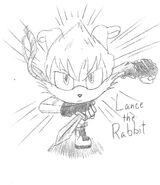 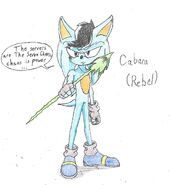 a method of measuring the immeasurable power of certain individuals

armor worn by the military division

shadow meditating on his team

leader of a medical division, amy

the ability types
Add a photo to this gallery
Retrieved from "https://sonicfanchara.fandom.com/wiki/Demon_Slayer_Organization?oldid=475470"
Community content is available under CC-BY-SA unless otherwise noted.