Trigger Warning: Albiet not graphic, this bio may contain mentions of violent and cruel acts. Viewer discretion is advised.

"You've never seen a show like this, folks! You shall witness such controversial practices, perverse acts, and violent dances! BLOOD WILL BE SHED! All for the entertainment for our wonderful audience! You won't see this glorious sight anywhere else!" -Dizzy's intro at the circus.

Dizzy ディズィー (dizi) is one of the main characters of Mischievous Mire.

Dizzy is a light blue Mischaker with a beige muzzle and a pink nose; The insides of his ears along with the underside of his tail are also beige, he has medium long black hair and black eyes. He wears a black and white striped tuxedo with a gold and black pin depicting the comedy and tragedy masks, a black top hat and black shoes.

Dizzy is playful and can be somewhat impish, he is paranoid and has a difficult time trusting others from having been betrayed by several people. He is very insecure, thinking he is a failure even at the smallest of missteps.

Dizzy comes from a family of entertainers, his parents were in a traveling show while his grandfather is retired from circus life. Even as a young child, Dizzy wanted to be a famous entertainer someday and bring joy to kids and adults alike. One peaceful evening with Botter(his grandfather), he conversed with Dizzy and told him about something that had troubled him for a long time. 20 years from now will be a catastrophic event that will change life in Endolæt drastically, worse still he did not know who would cause it to happen; All Botter knew is that Dizzy had to escape Endolæt so he could be safe. During this time, his parents had gone traveling outside of Endolæt to perform a show, but they had been gone for many days; Botter took Dizzy with him and the two escaped into the regular world. Once he was old enough to be on his own, Dizzy joined an underground circus club, unfortunately Dizzy was not aware of the organization's illegal practices and the twisted mind of the ringleader. The man would beat him up and slap him when he would make a mistake or reveal his marking on his arm to anyone and would abuse him emotionally, calling him a mistake and an ugly gremlin, along with other insensitive names. Dizzy would play it off as an act around others and would try his best to hide his pain, but this was impossible after an argument with the boss (defending his grandfather), leading to him chopping off Dizzy's ears and throwing them in front of him in a rage. Blinky(a fellow member who was also mistreated by the boss), came up with a plan to escape, taking Dizzy along with him. They drove far away in Binky's old truck, and never looked back. Soon after, the man was arrested for charges of abuse and several financial crimes. Dizzy stayed with Binky for a few days, and after a nasty argument Dizzy was kicked out and lived on the streets.

He was robbed of all his money and beaten up, living in a cardboard box. One night while he was sleeping, a young wolf spotted him and shook him awake. they talked for a while, and she offered him to stay with him until he could get back on his feet. He refused at first, but then gave in. She cooked a warm meal for him and washed his clothes while he bathed, and let him stay in her guest bedroom; She introduced herself as Platinum. Dizzy was humbled by this act of kindness, and was grateful to be out of danger's way, at least for now.

Weeks passed, and Dizzy began to feel comfortable with Platinum, and trusted her completely. He knew she was genuine and she would never harm him. Unfortunately for him, he was still under possession and would still have violent episodes with zero control over them. Once Platinum caught him after he set a whole village on fire, she knew something was very wrong. This just wasn't Dizzy and she knew it. The way he smiled without a word at his carnage was a sign that Dizzy was not himself. The only way she could get him to stop was slapping him out of it.

Over time, Dizzy had become infatuated with Platinum, and followed her around everywhere she went. One morning, while out getting groceries Dizzy bumped into someone. This was his grandfather Botter, who was overjoyed to see his grandson again. He embraced Dizzy and sobbed, Botter was worried about Dizzy ever since the two were separated, and was relived he was alright. Dizzy was happy to see his grandfather as well, and told Platinum he would be moving in with him. During his time with Botter, Dizzy learned how to fish and how to use a computer, which the latter proved useful in missions. As the spirit's hold on him grew stronger, he grew more agitated and impatient with people, leading to him snapping at Botter and storming out of the room, slamming the door behind him while sorting through documents.

Botter and Platinum grew worried for Dizzy, as he wasn't himself. Platinum managed to pull through and help Dizzy get rid of the spirit indefinitely with the help of Queen Thistla using the power of the Cleansing Pearl. However, even after he was cleansed, many people still hated Dizzy and saw him as a threat.

Template:Quote left Meli and Dizzy have a strong bond, as they both would tell each other jokes and stories. Dizzy sees his mother as an inspiration for his career path as a stand-up comedian, and enjoys her company. He was heartbroken to have left Endolæt, since he was unsure if he would see her or his father again(not to mention they were MIA for quite some time), and hoped they were okay.

Dizzy loves his father unconditionally, and enjoyed going out in town with him and Meli as a child. He thinks his father is very goofy, but that's what he likes about him. Oryo taught Dizzy everything he needed to know about show buisness, and how to make a great joke; Oryo was the one who gave Dizzy his comedy tragedy pin for his 8th birthday, and he has cherished it ever since using it on his showtime suit he obtained much later on in his life.

Template:Quote left Dizzy and Botter are a great team and have an unbreakable bond; His grandfather would watch over him while his parents were at work, and during this time he'd teach Dizzy valuable life lessons, their people's culture and how to control his powers; On his 18th birthday, Botter gave him a suit that his grandfather handed down to him when he was his age, and Dizzy loved it. He put the pin on it and would wear it to every performance he was a part of afterwards. Botter trained Dizzy at a young age, and was his mentor for a long time. Dizzy sees him as a role model and someone to rely on.

Template:Quote left Chloe and Dizzy met at the Crescent Big top, and became close friends. He felt awful for her as she had to endure the abuse and witness the vile acts that went on there.

Carol was the sunshine he needed while at the cursed circus. She had experience with being a ringmaster, so she assisted him in that regard. Dizzy can always count on Carol and sees her as a wonderful friend; No matter how rough things got, she would motivate him and was positive that things would get better in time.

Just like Dizzy himself, Alton was very uncomfortable and frightened at the Crescent Big top. They didn't talk much, but they are pretty good friends.

Dizzy felt Tianna had the worst treatment, as she was seen as a freak. He saw her as beautiful and felt she deserved better then the hell she endured, and was surprised at how well off she was after she escaped with the others. Her and Carol stayed strong throughout, which Dizzy was confused but impressed. He loves Tianna and thinks she's a fun person to be around because of her determination and bubbly personality.

He relates completely with Bryce, as he has severe socially anxiety. Dizzy has had to defend Bryce many a time from being beat up or other people making fun of him, so Bryce and him have a strong relationship from that.

Dizzy and Cordell have an awkward relationship, as many of the acts he presented involved him being put through many painful things. He knew it wasn't his fault, but Cordell distanced himself from Dizzy after they left the circus. Dizzy still sees him while out with his friends, and wonders if they will ever be friends.

Template:Quote left Dizzy shares a special bond with Razzy since they are both from the same tribe, and have a strange connection that brings them together when one is in peril. Razzy would stick by Dizzy even when everyone else abandoned him, which makes Dizzy like him all the more.

Template:Quote left Dizzy is head over heels in love with Platinum, and thinks she is amazing. She has saved him more times than he can count, and stands by him when nobody will. He feels more at peace when she's around, as she is one of the only people that knows how to calm him down.

(certain things cannot be transformed into such as boulders, balloons, etc.)

-Dizzy at the circus.

-Dizzy at the circus, hiding his feelings onstage, but worried about a monster who was about to die from explosives.

-Being questioned about his involvement with the circus.

-Dizzy having a meltdown from witnessing a brutal murder.

-Dizzy talking bluntly and calmly to newly hired performer, freaking them out.

Dizzy pleading with the leader not to remove his ears. 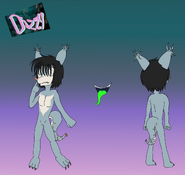