Zornelle (In one of her former lives)

Unknown (at least a few hundred)

Aboard the Thundercharm with NB6

Bewitching others, being a tease and a flirt.

"Fly Away" from Panty & Stocking with Garterbelt;

"Jingo Jungle" from Saga of Tayna the Evil (In Devolved State)

REBOOT IN PROGRESS: UNDER HEAVY CONSTRUCTION

Esmerelda has gone by many different names and faces. She was born as a mobian Hare named Estelle, then died and her soul was adopted by a race a fire demons, known as Emberman, and given the name Zornelle, was killed again by her step brother and wandered as a ghost possessing mortal bodies and assuming their identities, before she was finally given a physical body of her own, and given a name and identity of her own, Esmerelda the Dark.

While much of her history remained a secret to her teammates, and to a degree even herself, her dark and mysterious path has come to light due to her adventures during the New Beginning Timeline. She was born as Estelle, a Mobian Hare to her two normal parents. Her parents divorced when she was young and she frequent trips between visiting them both. During one of the exchanges, both parents were busy working and were unable to watch Estelle, so a babysitter was hired to watch over her until her mother was able to come get her. The sitter was a college girl who smoked and one day she left her lighter out and Estelle found it. The child was mesmerized by the flames and went around setting multiple things on fire to help her new "friend" grow. Sadly, the house eventually caught fire due to the sitter's inattentiveness and Estelle passed away.

She found herself on the Highway of Souls, the pathway to the afterlife when she was stopped by a mysterious figure who introduced himself as Adawrath, an Emberman. He asked her how a child so young ended up in the afterlife and she explained what happened, asking if he could take her back to her parents. Adawrath explained that she could not see them anymore, which sent the girl into a crying fit. Unsure of what to do, he calmed her with his flames and asked if she wanted to have a life where she could play with her fire and no when would ever leave her again. She agrees and takes her to the Emberman Realm, taking her spirit and placing it in the body of his recently deceased daughter, Zornelle.

Still having the mind of a child, the new Zornelle did as a child would. Laugh, play, and ignore her newfound responsibilities as an Emberman. Even as she grew older and learned that she retained the power and skills of the original Zornelle, she never took a liking to the battle-hungry lifestyle of the Emberman and instead chose to dance her way through life. And Adawrath loved her regardless. This angered her stepbrother, Agon, who was jealous of his sister always being the favorite child, and now a stranger inherited her body and continued to live out her legacy and ignoring all of her responsibilities.

Agon decided that enough was enough and tricked Zornelle into going to the mortal world, claiming that he had finally found 'Estelle's' parents. Estelle is too excited to notice that he said 'parents' despite her father being long dead and fell for his ploy. He killed her and upon learning that her spirit continued to exist, stole her physical body so that she had no way to return home. After a year or so of wandering the earth, Zornelle learned she could possess bodies in her new form and had to so that she wouldn't fade from existence.

She came up with a plan to get back home and defeat Agon. She would capture and train powerful bodies and ambush him when he came back searching for the still wandering spirit of his blood-sister, the True Zornelle. She went through several bodies and finally settled on powerful, psychic-using assassin named Lynnea, who she later would learn is the mother of her adopted twin siblings, Rusty and Aynoa. Unfortunatly, Lynnea's will was too strong and Zornelle was forced to separate from her. She later would meet Rusty during his depressive stage and convinced him to share his body in exchange for her power. The deal was made, and Zornelle used his psychic link with his sister to co-possess Aynoa and she used them both to launch an attack on Agon.

After many failed attempts and struggles to get stronger, she is ripped from Rusty's body by Heather and given a new one so her soul doesn't fade away. She teams up with her new friends, takes on the name Esmerelda, and seeks out Agon one final time. She manages to beat him in battle, but his spirit escapes before she can destroy it. Finally, Esmerelda finds the original Zornelle and sends her back to the Emberman so that she may rejoin her father.

Esmerelda is a complex individual, who intentionally covers herself in a veil of mystery and seductive deceit. Of the New Beginning 6 members, she is the most anti-social one, openly against being in large crowds, people being in her personal bubble, and intimacy. She is quick to agitation and can be very snarky and rude in response to people and things that annoy her.

Despite her demonic heritage and anti-social tendencies, she is not all doom and gloom and is actually one of the most upbeat people in the group next to Aynoa and Jay. She is a practical jokester and loves annoying the other members of the group by creating possessed copies of their belongings such as shoes, combs, phones, etc., and bringing them to life as soon as one of her friends tries to pick them up. She is quirky, bizarre, and a tad unhinged.

She is also quite hungry for knowledge and can often be seen with a large book in her hands. When she is not making the other's lives miserable, she is very fond of reading and learning about the history and culture of ancient cities, particularly their dances. This is more apparent on dark, rainy days where she will snuggle up by the window surrounding herself with plushies and enjoying a cup of 'tea'. It is revealed by Recon that what is in her teacup isn't tea but is actually energy drinks, a habit she picked up from Aynoa.

She actually began her life as a Mobian named Estelle. Estelle was a sweet and ever curious child with unfortunate destructive tendencies. She has charcoal colored fur and her hair is cut into sharp bangs, is colored jet black on the right side and bone white on the left (ironically this is her natural hair color), and is tied back in a small ponytail. She wears simple black shoes, a black dress with white markings and a large bow tied around the waist, and stockings. Even as a young child, she had a distinct gothic style and often wore spiked bracelets and fingerless gloves.

After she died and her spirit was taken and placed in the body of the deceased Emberman, Zornelle, she sported the girl's former look. She had red fur with short jet black hair, with her bangs grown out on one side with an undercut on the other and a green horn on her left side. She wore a long white cut, a green crop top, and black leggings. She wore green, heeled sneakers with a double strap and spiked plates on top.

As an Emberman spirit, she looks like a fiery, purple figure with a solid green mouth and irises. This ghastly form has few distinguishable features, aside from her long bangs and undercut she sported during her time as an Emberman.

Esmerelda's body was modeled by taking features from Heather and Aynoa and combining them with Esmerelda's ghostly spirit and some chi magic. The result was a creature with jet-black fur and white skin, with Heather's long hair sporting Aynoa's pink hair color. She is average height as Heather is very tall and Aynoa is pretty short. Her attire consists of a striped inky-purple and acid-green bodysuit with the legs removed, a white coat with orange cuffs and trims, and a pair of purple shoes with green heels, white soles and straps, and orange buckles and markings. She has a very 'Halloween-esque' style with elements of her childhood Gothic Lolita look.

Rusty the Porcupine and Aynoa the Porcupine: You could call Esmerelda the third twin, as she's like another sister to the porcupines. She spends a lot of time with them both and knows as much about the two of them as they themselves do. Due to her time possessing the two, she is able to join their telekinetic connection.

Agone the Emberman: Her Emberman step-brother. Agone never liked her, hating her for trying to replace his dead sister and for her lack of concern about the Emberman way of life. He is the one that killed her the second time, resulting in her wandering Mobius as a spirit. Esmerelda's whole goal during the NB Timeline is to find a body strong enough to defeat him and force him to take her back the Emberman realm. The two obviously were on bad terms and Esmerelda would eventually kill him out of hatred and revenge.

Zornelle the Emberman: Esmerelda was originally adopted to "replace" Zornelle after she passed away, and her spirit was placed in the late girl's body. After the events of New Beginnings, Esmerelda manages to find Zornelle's lost soul, but is too late to return it to the Emerberman Realm before it fades forever. In her brief apperances, Zornelle is depicted as a headstrong, yet caring older sister who comforts Ezzy and encourages her to live her own life. It is clear that if the two spent more time together, they would've formed a tight sisterly bond.

Lynnea the Porcupine: Rusty and Aynoa's mother, and also one of the first bodies Esmerelda ever possessed. She was the most powerful body Esmerelda ever bonded with and to day has been the only one to forcibly eject her through willpower alone. The two meet again towards the end of Esmerelda's quest to unscramble her memories and both come to terms with their shared history, as well as the fact that Esmerelda had been possessing her two children as well. Lynnea has since fought alongside Esmerelda in order to defeat her brother Agone.

Heather the Lynx: Esmerelda's other teammate and the leader of Team Hope. At first the two had a very rocky relationship when Heather mistakenly took Rusty for being possessed by a demon (he was, technically, but willingly so) and forced him out of her body. But after extensive time together, Heather began to accept Esmerelda as a friend and ally, though still somewhat cautious of her going rouge.

For the same reason as with her appearance, her abilities have changed several times:

She fights with a style that she created known as Harlequin. This style involves very little physical contact with foes, and instead focuses on manipulation, trickery, deceit, and mind games. She shares Rusty's mentality that there is no such thing as a clean fight and to do what you must to win.

Estelle (her first and only natural appearance)

When she assumed the role of Zornelle

First version of her signature look

Esmerelda (Emberman Influence during the events of Dawn of the Equinox) 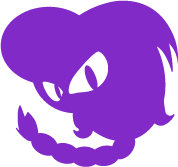 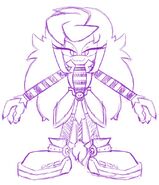 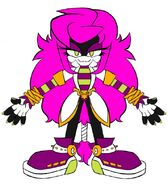