"My Claws will rip you appart! "

Weapons: His metallic and genetically modified hands which are now claws

Likes: Causing trouble, money, and helping only himself

Dislikes: Sweets, Heroes, loosing money, being told what to do, cheap people, Fire Arm and his family, The Fire Hedgehog tribe, Anyone who gets in his way

Occupation: Treasure hunting but mostly works as an Assassin

Association: Was once with the Silent Knife Alliance (a group of assassins)

Personality & ect...: Freddy loves, well money! He wants to be rich and doesn't care how he gets it or who he hurts to get money. Freddy is very smart and can easily win in a fight with his way stronger older cousin Fire Arm because he fights with his brain, just not brute strenght. Freddy loves hurting others when they have done wrong themselves. He show compassion for orphaned children and on rare cases the weak even though he's an assassin. Freddy will uses any trick in the book to get the job done and will hurt love ones to get close. Freddy's greed for money comes from his childhood from when his sister was sick and his family was too poor to help.

"So how much you gonna pay me?"

Freddy wears black pants and has dark red quills with a dark shade of orange in his highlights. Freddy has massive hands with 6 inch claws. On each arm and hand there are circles that control his level of elemental output. He wears a black jactet and his eyes have small pupils.

When Freddy was little he wasn't very good at using Fire elemental attacks. Now with is genetically engineered metallic claws he can use massive amounts of fire and water elemental attacks. The rings on his arm, fingers and hands control his water elemental abilities. Freddy can change his rings to different colors which is known as elemental change. This ability comes from his metallic claws which can make him use multiple elements! This happens when the gears in his arms change and his blue rings start glowing in every color in the spectrum until it turns grey. This means Freddy has at least 20 minuets to use as many elements as he can because once those 20 mins are up his arms will rust instantly and will be in no use and he'll have to get

Freddy can use water and Fire elements which isn't natural for Vexians. Vexians can't use elements which are total opposite, due to this Freddy can't over use his metallic arms. If he dose his body will shut down due to his non-natural abilities. Freddy must rely on Dr.Eco in order to fix his arms which makes him a literal slave to the Doctor's abilities but he won't hold back to attack or wound the Doctor whenever he can.

Freddy lived in the fire hedgehog village with his mother and sister. His father was a warrior who died in battle which caused their family to fall into poverty. One day Freddy's sister got very sick and was said to have only a few years left. Freddy needed money so that his sister would get the care and treatment she deserved. However his family was dirt poor and Freddy wasn't going to get help from the council of his tribe who were too busy with other priorities (Fire Arm becoming the new guardian and banshing Thunder Punch). So Freddy did anything for money and when Dr. Eco came to attack the village he left with him so he could get money. He became Dr. Eco's instrument of destruction. Freddy's main goal was to help save his sister but in the end his greed devoured him. 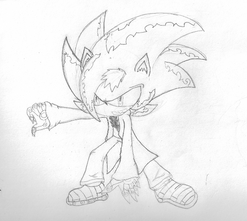 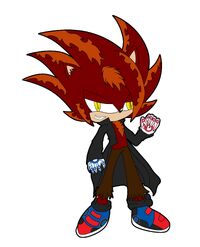 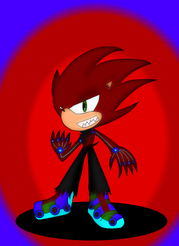 Add a photo to this gallery

Freddy and his cousin Fire Arm were close as children and stood side by side. But when his father, a triblel war leader died The Councle of Fire (the tribe's governing leaders) did nothing to help Flints widowed mother and illl sister. Flint grew to hate his uncle (Fire Arm's father, a council leader and his mother's older bother) and thus when the two cousins grew up they lead two very diffrentt lives there was no "family reunion" every time they meet on diffrent sides. Fire Arm hopes his cousin will under stand (since they couldntt help due to the banishment of Thunder Punch and the reconitionn of the new fire gem guardian) but Flint, now named Freddy, has gone too far to turn back to his family.

Retrieved from "https://sonicfanchara.fandom.com/wiki/Freddy_The_Hedgehog?oldid=462870"
Community content is available under CC-BY-SA unless otherwise noted.