(full detailed story will be published on a seperate page)

I don't think I will do a lot lol, I don't feel very well today becaause I didn't get any sleep last night =_=

Freya is a Seedrian/Fox Hybrid whom, after years of abuse, suffers from severe depression. She enjoys Fire and lighting candles around in her small apartment for some reason because soothes her(I know, weird)

She was born in a small tribe away from society, and being the only hybrid, was abused for being different. She even ended up staying in a freak show for a while.

During one of her performances Rose found her, and decided to kidnap her and take her to the City. Freya refused to leave her apartment, but eventually would go out for long walks - avoiding contact with anyone.

She likes to hang out in the Musuem and shows a great interest in History and Art, she sometimes draws depressing emo pictures in cemmentaries |D

(so not making this up as I go along) |D

Freya is anti social and always tries to avoid contact with anyone, only really talking to Rose and Tack - Especially Tack. She will only talk about her past with Tack. But Freya is Smug, Sarcastic and like Tack; a comedic pyschopath. She likes to stab dolls (o.e) and set fires. She is quite sadastic. Her traumatic and abusive past has made her hate most people, and immedietly thinks that they will abuse her like everyone else did. She barely trusts anyone because of this, and sometimes even kills random people.

Freya can also have "bursts of violence" where she will drag someone into an alleyway or somewhere like that and stab them to death. Like Tack, she finds this amusing and even pulls sadistic pranks with her. She is deemed "unfit" for society, and even spent some time in an asylum.

She is severly depressed as well due to her traumatic past, and because of this is considered slightly insane. Sometimes she lights a load of Candles and "Talks" to imaginary friends who like her are sadistic, or the people who abused her. She sometimes even starts to scream at herself, calling herself a failure and having an emotional breakdown. She is pessimistic and also prone to panic attacks.

However, she sometimes acts "normal" around people and spends time wandering around museums, not really talking to anyone, trying to keep a low profile. To do this she is usually seen wearing a long black cloak.

She also likes to free run (running across buildings 'n stuff lol |D) - she also uses this ability as a way to escape.

She has no powers, but is shown to be quite intelligent and can usually think of a way to get out of situations. She is also a free runner, so is good at escaping across buildings etc.

She is also good with firearms, but barley uses them as she prefers to use knifes. 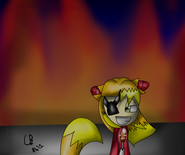 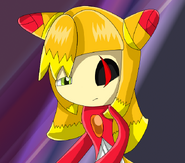 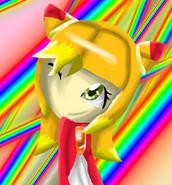 Freya by Greeny ^^
Community content is available under CC-BY-SA unless otherwise noted.
Advertisement