A double decker house on a grassland

in love with Fu-Ling The Red Panda

Evils like Dr. Eggman, being poked fun for liking something…

Kingston Shanwon, a brave, agility and smart fox who is a mechanic, as well as an IT professional, but some of the mechanical skills are learned from one of his good friend, Tails. He is now 18 years old, living in a house all by himself on a beautiful grassland by himself happily.

Kingston works in a computer company at a small town which is 5km away from his house every weekdays after he graduated from secondary school. He is also the hero of that town as he saved it from Eggman once when he was 15 which is why he has a nickname "The Fire Fox", he is also known as the most powerful fox in the Mobius.

At holiday, he likes to do things that he wants to do such as exploring, photographing, running, swimming and more.

Although he is the only child in his family, he has two young cousins, Simon and Tiffany.

Kingston is a normal yellow fox with white fur around his muzzle, his hands, feet, and the tip of his tail, also on his entire front body. He also has four locks of hair on his forehead. He used to wear his T-shirt and trousers all the time until he turns 18.

Now he only wears his goggles, a pair of black socks, and a pair of blue and white shoes with two straps. He also has a necklace with a pearl at all time.

In his fire or super form, he often loses everything he wears. His locks of hair on his forehead will be spiked up, his yellow fur will turn into flame red (fire) or light green (super). The irises of his eyes will turn into yellow (fire) or red (super). The tip of his tail will be on fire, the flame will become green in super form.

He lives in a double-deck house all by himself on a grassland. There's a workshop next to it, and a backyard outside the house and workshop, which is full of grass, and with few flowers, and also a lake which he loves soaking himself in. He can get to the backyard from the house and workshop. There are wooden fences surrounding his house, workshop and backyard.

Ever since he was born, he was living happily with his parents in a village. He never misbehaves in his entire life. He started to know about the town where his current workplace is since he entered secondary school. Due to his parents' careers were getting busier, they got no time to take care Kingston, so he moved into his current home and started living by himself since he was 12.

Luckily, his parents taught him well how to take care of himself, so he got used to it. They will also contact each other when they have time, and his uncle and aunt will visit him sometimes. He had nice grades every school year, he was the top student in IT every year. Therefore, he was accepted to have a job in a computer company in the same town after he graduated from secondary school.

Kingston has some strong powers to fight/protect anyone.

Kingston got his secret fire magic powers from a mystical mage of the fox god while he was 15. The mage said Kingston was chosen to be "the envoy of the fox god" and gave him the necklace with an orange pearl which he called "The pearl of the fox god". He was told to wear it all the time so he can use it to protect himself and activate his secret powers when he needed, including transforming into Fire Form with it as well. He was also told to use his power on good purposes, like helping others who needed, stopping the evils, protecting people from evils. It also has its own protection from getting stolen by anyone else. Another thing, he was warned by the mage about his Fire Form, which would destroy all his clothes permanently which would be very painful during the transformation at first (getting too angry is the highest chance of this consequence). However, he got used to it and now he can handle the power so he doesn't feel much pain anymore, he also usually will take them off before his transformation. He was embarrassed at first after he saved the small town where his workplace is with his fire form for the first time as he lost everything he was wearing during his transformation, but people were cheering at him instead of laughing. A week later, he was awarded as the defender of the town and even has his own statues in not only his working town, but the village where he was born.

He will be more agile and have stronger physical attacks. He can even shoot three fire beams in one hand and they will be stronger. He will also able to fly. His yellow fur will turn into flame red and his eye color will turn into yellow. However, his power will often burst all his clothing during his transformation.

The tip of his tail will be on fire and he will have fire aura around his entire body. He can produce a very powerful fire sword. When he is already holding a sword, he can turn it into one as well. While he is using it in fire form, it can break through any metal. He still can use it even if he wears off his fire form, but will be less powerful.

Despite how powerful he is, he won't rely on them all the time so he also has fighting skills instead of using his powers.

Swimming, running, communicating with other foxes (Especially non-anthropomorphic foxes), mechanical skills (some of them learnt from his friend Tails), martial arts, survival, First-Aid, cooking and more

Kingston is a friendly and brave fox. He also often helps the people around the town where his workplace is when they needed. He likes to make friends with others and wild animals. He gets angry sometimes but not much anymore. 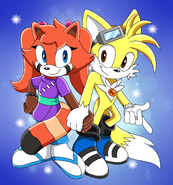 Kingston and his 16 years old girlfriend, Fu-Ling the Red Panda (Art by SonicTheEdgehog on dA, Fu-Ling created by melodiavalentine on dA)

Kingston is now on fire! (Art by FrostTheHobidon on dA) 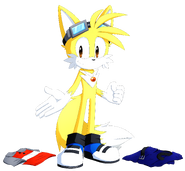 "Do I look better that way?" (Art by Blacky-Doll on dA) 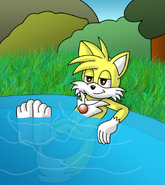 Kingston's favourite thing to do (Art by gameboysage on dA)

Here comes Super Kingston, he only remains his clothes once... (Art by Amandaxter on dA) 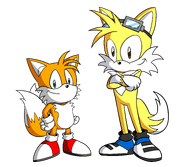 "In case if you confuse me with my good friend Tails." (Art by sergeant16bit on dA)

Art by RagingFurry on dA

Art by dragonpriness on dA 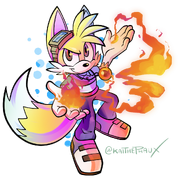 Art by KaiThePhaux on dA 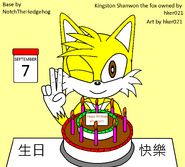 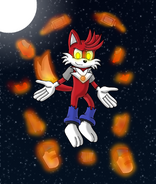 Kingston is "on fire" again (art by gameboysage on deviantART)

Kingston and his fire form (art by sergeant16bit on deviantART) 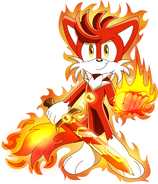 Fire Kingston Stage 2, the true form of the Fire Fox (Art by SonicTheEdgehog on dA) 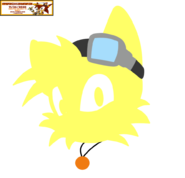 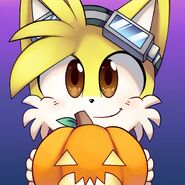 Art by ShadowLifeman on deviantArt 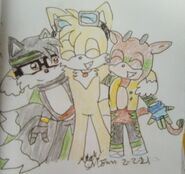 Kingston and his best friends, Avro and Erik. Art by melodiavalentine on dA

Kingston and his young cousins, Simon and Tiffany. (Art by TylerBucket on dA)

Kingston and Neon DT, Art by one of my best friends, RagingFurry on dA

Kingston's Minecraft skin, made by one of my best friends, Erik-The-Okapi

The Children of Light and Shadow, Kingston and his best friend Avro (Art by SonicTheEdgehog on dA)

Fire Kingston and Aether Avro (Art by SonicTheEdgehog on dA)

Kingston transformation into his fire super from (Art by Tylerbucket) 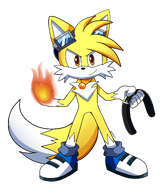 Kingston activating his power (Art by Domestic_Maid on Twitter) 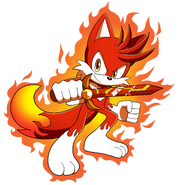 Kingston in his fire super form (Art by Domestic_Maid on Twitter) 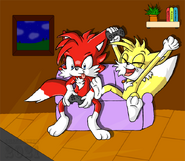 Gaming with his young cousin Simon (Art by Amandaxter)

Kingston and his young cousins, Tiffany and Simon dressing up the same way (Art by Domestic_Maid)

Team Okapi chilling in a sauna (Art by gameboysage)

Avro vs Kingston, Art by gameboysage

Kingston vs Avro (Without clothes), Art by gameboysage