Speed: She's not a speedy thing, thats for sure. She's pretty slow. When angered her speed goes up a little, maybe as fast as Tails

Power: She's not Knuckles, but shes pretty strong, especially when angered. She doesn't have upperbody strength (her arms) but she can break through some materials (not steel obviously) by hurling herself at the object, she also has very strong legs and leg muscles, which lets her jump higher, despite not having mucho macho arms, she is a very good climber, much identical to a sloth.

Flight: Cannot fly, but can drift away in a breeze if she jumps off an area that is high up and only if she meets the certain requirements of a strong wind which puffs up her dress, making her able to float for short periods of time, she is only able to do this due to the fact she has such a light body mass and is smaller than Sonic, Maybe an inch or two shorter than Amy Rose.

Personality: Loud, at times short tempered, bitter in some cases, selfish sometimes, remorseful to people who deserve it, Shy/Quiet when meeting new people, Loving, Gets jealous easily, over protective, thick-headed but clever (not a genius though) She has a horrible chip on her shoulder and over reacts to small things

Whenever someone mentions her family or her old appearance, if someone tries to flirt with Rox

Muffin since her birth to the age of ten lived in West Robotropolis, an abandoned section of Robotnik's dominated land, which was then populated and rebuilt by mostly hedgehogs and lizards.

There was huge controversey between the Hedgehogs and Lizards, and the most common reason was because the Hedgehogs blamed the Lizards for Robotnik's domination over their now-rebuilt land. Why? Because most of Robotnik's robots reminded them of Lizards, cold with beady eyes, and because of this, Lizards and Hedgehogs lived on opposite sides of the land.

On her way to school, the hedgehog children would usually pick on or make fun of the young lizards who were on their way to a different school, sometimes even going so far as to kick dirt, spit, or throw marbles at them. They loved to pick on Muffin the most, probably because she was the smallest of the bunch. Muffin was horribly picked on until the age of ten where she finally snapped and ended up breaking the quills off of one of the bullies.

The quills that had broken off stabbed Muffin in the leg and knowing that Muffin was now vunerable, the bullies began to pull at her hair and kick her in the stomach until she almost violently bled to death, then departed.

Muffin, due to overwhelming pain was unable to materialize thoughts of where to go or where she lived and she could not go home to her parents for help, and crawled like a worm into the forest and at the time, Robotnik's robots were scavenging for small woodland animals to be put into the robotizer, and sucked Muffin up in the vaccum as well.

After returning back to base, the robots dumped everything collected into a net so Robotnik could examine their catches. He saw Muffin, and proceeded to tell the robots to throw her in the robotizer. Muffin, who was severely injured begged for her life and said if Robotnik helped her wounds she would do anything he requested.

Robotnik saw this as an opportunity for a potential Slave/Henchman and released her from his robots' grip. He then took her into his lab and removed the spikey quills from her leg. The spines had dug in so deep that her nerves in that leg were destroyed, so she could no longer feel in her left leg, but she could still use it.

After cleaning up and bandaging the wound, Robotnik awoke her out of her comatose. She thanked him profusely and asked if she could just have one more favor. He asked what it could possibly be, and she said "Well, sir, you have so many neat mechanical toys you made, could you change things too?" "Well of course my dear." Robotnik replied. "Could you turn me into a hedgehog?" she grinned, sparkles in her eyes.

" A.....HEDGEHOG.....uh...I mean, I believe I could, my dear." he stopped himself from getting angered at the thought of the spiky blue hedgehog who always manages to beat his plots. "But I'll need some DNA." Muffin said

"Well, why not use the spines that you took out of my leg!" Robotnik dug around in the waste that he had thrown the quills into and pulled out three yellow spines.

He placed them on the disk and told her to step in the robotizer, and reversed the effects from robot to hedgehog.

After a few minutes, out stepped a small yellow hedgehog with bright green eyes and puffy hair.

Muffin saw herself in the reflection of the glass. She was overjoyed. She jumped on Robotnik, giving him a big hug and proceeded to leave. He stopped her for a brief second and told her that he would one day need her for a favor, and to always remember who made her that way. Little did she know, in her now-unfeeling leg wound he had snuck in a tracking device chip, so he would always know where she was or where she went.

Muffin then returned home, singing and laughing, passing all the bullies who bothered her, whom said hi. She finally got to the lizard part of the area, which was completely destroyed. Panicking, she began to run home. She got to her house, which was completely burn down. Muffin began to cry, but then stopped after she heard a voice coming from inside the home. She opened the door to see her mother and father huddled together with her baby brother Tripp. She came up to them asking what happened. Her mother, noticing Muffin's boots, broke down even more and said "Oh my god, they even took her boots." "But Mom, it's me.." Muffin said.

"Leave." Her father barked. "It's pests like you that caused this. I wouldn't put it across you that you were one of those little runts who had everything set on fire. We've already lost our daughter to monsters like you."

Tears began to well up in Muffin's eyes, and she kneeled down to her brother. "T...Tripp...you know who I am don't you?" She began to move her finger towards her baby brother's nose. He bit her and began to cry. Muffin could take no more, she broke down and ran into the forest, leading to the hedgehog part of West Robotropolis. She was then found by an elderly woman, Daisy Pygmy hedgehog who took her in and watched her grow. She made Muffin a small black dress to wear with her boots and gave her green hairbeads to match her beautiful eyes.

Even though Muffin was raised by Daisy, she could never forget her parents. She developed a slight case of schitzophrenia, which got worse and worse as she got older. She took Daisy's apron, because it was the most beautiful thing she had ever seen. It was white with lace, and had one single red heart on it. Daisy let her keep it of course, since she now considered Muffin her own daughter.

After her fifteenth birthday, Daisy passed away. Muffin was devastated, and for a year Muffin did nothing but cling to Daisy's apron and cry. She had horrible emotional problems until she met Rox, whom she fell in love with almost immediatly. She has now cleaned up Daisy's old house and now houses her friend Icicle there to live with her, because, like Muffin, she has no place to call 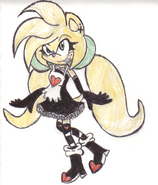 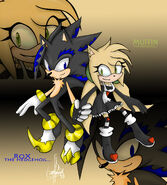 Muffin and her boyfriend Rox 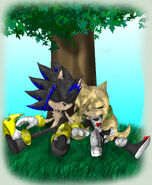 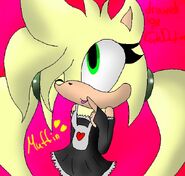 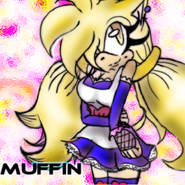 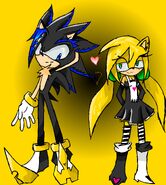