REBOOT IN PROGRESS: UNDER HEAVY CONSTRUCTION

Recon is an anthropomorphic wolf who hails from the militaristic Wvelven clan (pronounced well-vin) in the Wvelven Mountains. He is a child prodigy and was actually invited by his clan leader, Scar, to lead the clan after his death. Recon's life was set into stone until Heather came along and got him kicked out of the pack. He is a powerhouse and a tactician, but his true strength however, lies not in his muscles or brains, but in his resilience and inability to give up. He is known to go up against highly unfavorable odds and still pull through more often than not.

Though he eventually worked his way back into his pack, he was faced with one final challenge before being able to claim the title of Top-Dog...kill Blade Ruger. Ruger was an abandoned panther cub who was adopted by the last Wvelven leader, Scar, and trained in the militaristic wolves' way of life. He excelled in every category with ease and was a prime candidate for the next pack leader, except for the fact that he had little regard for the strict rules and regulations the Wvelvens set in place. He was banished for his unlawful and dangerous behavior and left to become stronger. 10 years into his exile, he came back more powerful than any of the others and began killing off any other wolves in the running for potential leader to prove that he was superior to them all.

Recon proved to be Ruger's biggest adversary. The young wolf's pure brawn, intellect, and tactical mind proved worthy of not only becoming top-dog, but even defeating Blade himself (which he eventually does by mortally wounding him). Barely holding on to life, Ruger decides to spend his last days training Recon further, helping him advance his cybernetics and combat skill. Finally deciding that he'd given Recon all that he could, Blade gives him one last gift and willingly shutting off his own life support system, resulting in his "death by Recon's hands" granting the younger wolf the opportunity to rejoin his pack.

Recon is the definition of the strong silent type. A man of few words, he typically stands at attention with the calm resolve of a trained soldier, arms crossed and head held high. Due to his upbringings, he is generally very gruff and cross sounding but doesn't mean any harm.

Early on in his training, he was known to be quick to the draw, and preferred a quick shoot-out to assess his enemies before openly engaging in combat. After several upgrades and intensive training, Recon began to excel to a level far beyond his average adversary, eventually obtaining the title of Warrior Elite, a rank given to the top 20 strongest fighters on Planet Destony. Due to his new level of power, he no longer finds a need to analyze foes beforehand and now does it in the midst of combat. This also resulted in a tendency to look down on weaker foes and not take them as seriously.

Recon is by far the most serious of his team, especially given the fact that Havok is made up of a temperamental short-stack porcupine and a bumbling, comedic bird. But even compared to the more level headed girls of Team Hope, the difference is still night and day. He doesn't seem to have any sense of humor or playful nature and Heather often describes him as having the charisma of a rock. Despite this, she does say he has a level of depth that she herself didn't see, even after spending months wandering the world with him.

He cares deeply about his friends and always pushes them to become stronger, even if through aggressively physical means. He's been known to knock Rusty and Jay around to test if there still strong enough to take care of themselves. He has a deep fear of his friends dying when he's not around to protect them, due to Heather being impaled by Ruger when Recon was too beaten to protect her.

Tall and fairly built with muddy brown fur, and white markings on his muzzle, tail, chest, hands and feet. He also has a white spiky mohawk. His usual attire is a camo vest, lime green cargo pants with white stripes, and black boots.

Heather the Lynx: Lover and future wife. Growing up in the the Lycato and Wvelven tribes, Heather and Recon respectively were raised to not trust each other. When Heather's destiny required her to venture out into Wvelven territory (which ended up costing Recon his position as kid prodigy and member of the clan) the two weren't on the best of terms. But through their adventures, Recon begins to forgive Heather for getting him kicked out of his clan and they later fall in love.

Rusty the Porcupine: Rusty would be the "night" to Recon's "day," if night was filled with constant squabbles, fiery explosions, and comical backtalk. He is a loose canon of a little brother to Recon, and Rusty makes sure that Recon knows it. With Recon being the logical one and Rusty being the "punches now, questions never" one, planning ahead never seems to get anywhere. While Rusty does give Recon as much back talk as possible, he does respect Recon's intelligence and strength, though he always denies it.

Blade Ruger: It would be an understatement to say that Ruger was the most influential person in Recon's life, more than Heather, and more than Rusty. Blade was a tactical and combat genius who pushed the young Wvelven to his mental and physical limits time and time again. While he was evil and killed off many of Recon's fellow Sharpclaw warriors, gaining his respect was one of Recon's highest accomplishments. After being mortally wounded in their last fight, Ruger dedicates the rest of his life to training Recon and eventually takes his own life to give Recon the "honor of killing him in battle." Recon was so inspired by everything that Ruger did for him that he created R.U.G.E.R, a recreation of the panther's mind as an AI program that Recon uses in his cybernetics.

Jay the Warbler: Recon's other "little brother". Jay listens to Recon's ideas and leadership intently, but usually loses focus or forgets the whole discussion within minutes. Due to his intelligence (or lack of) most of what Recon says goes right over Jay's head. To make matters worst, Rusty constantly gets Jay involved into his shenanigans and drives Recon up the wall. The two will play pranks, question his decisions, and make Recon's job much harder than necessary. When they do mature up, they will never leave Recon's side and will follow his orders until the end.

Esmerelda the Emberman: Recon doesn't know what to think about this wild child. Believing she is a 2,000 year old spirit of a fire demon, is hard enough to fathom already. Believing she now has a physical body made of energy, completely illogical to him. What he does know, is that she cannot be trusted and doing so would be foolish, on the verge of stupid.

As far as physical power, Recon is immensely strong. He has been training his entire life to become the leader of his pack and has never let that goal stray any higher than the top of his to-do list. At the peak of his Wvelven training, he is able to lift and throw large objects up to the size of the Death Egg Robot. His strength only grew after obtaining his arm cybernetics.

Recon also has the brains to back up his brawn. He is very skilled in computers, hacking, and programming, and has also had a fair share of inventing as well. He is quite knowledgeable in computers, as well as many forms of weaponry. He is known for being the brains of the operation, however, if there's a problem just too big to work around, he is quite content with dropping the gadgets and tackling his problems with his fists.

Upon reaching the Sharpclaw status in his pack, he went through the Wvelven ritual of replacing the arms with cybernetic enhancements. These limbs are very durable and greatly increase Recon's strength. They can also carry a surprising amount of ammunition despite their small size. Recon's enhancements are mounted with mini shotguns, rockets, and various explosives.

He later builds a second version which are made of Canenite metal (canine + -ite), a special alloy that is extremely durable yet easy to mold under the right conditions and is essentially the "vibranium" of his universe. These new and improved cybernetics are so strong that they have taken direct blasts from Rusty's black fire, and stopped the blade of Heather's spear (forged by the Lycato nature goddess herself).

He has gone through various models of his arm cybernetics over the years, enhancing and remodeling them for various missions and uses.

He over complicates everything, and is always looking on too large of a spectrum.

He is also too confident in his strength and abilities, and thus is reluctant to accept help from others.

He often stresses himself out with all the decisions and choices he must make, and sometimes will freeze up or burn out when faced with the smallest of problems due to him reaching his mental, physical, or emotional, limit. 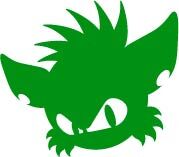 Retrieved from "https://sonicfanchara.fandom.com/wiki/Recon_the_Wolf?oldid=475711"
Community content is available under CC-BY-SA unless otherwise noted.