Oh God we re-working this mess

Sam grew up with her father on Mobius. It was just her and her father as her mother passed near the tail-end of the Great War, which her father took part in. As a mixed result of both his time fighting as well as the loss of his wife, he ended up attempting to coddle Sam--much to her frustration. She was kept in often where he could keep a watchful eye on her, though this absolutely strained their relationship. This worsened as Sam became a teen and he didn't offer any proper explanations or try to ease any restrictions--however, Sam's own rebellious and troublemaking tendencies didn't exactly help. He didn't see her as mature or responsible enough to take care of herself out there, and she resented him for not giving her a chance to be more than just a child. This created a cycle of her sneaking out, her father tightening restrictions when he found out, and them arguing over it.

This dynamic was turned on its head when Infinite came along, however. Their home was destroyed and they got separated by the chaos and confusion of the sudden onslaught by this jackal and Eggman's army. From here, Sam joined the Resistance and began working alongside them.

Sam was my first Sonic OC from when I was like. 11. Which is about the same time I made this page! She was originally named Jade and was essentially Sonic but a girl and slightly to the left, in true 11 year old fashion lol. I'm probably gonna spend a good chunk of this page here for now because I'm feeling nostalgic and appreciate the changed this gal has gone through.

Jade's original premise was that she was just vibing one day, saved Sonic from a classic Indiana Jones boulder, and they fell in love The End. I was obviously more preoccupied with my Sonic obsession than character creation, but that's just how it is around that time. Jade was a blue hedgehog, had long blonde hair with blue tips, and sky blue eyes. She wore a white T-shirt, black jacket, blue jeans, white gloves, and had black converse. I was keeping it simple considering all I really had to work with at the time was MSPaint and bases from Deviantart. I redid her design for fun though back in 2017! I still like how it turned out 👍

This idea and design was scrapped pretty quickly as I learned more about Sonic and decided I could do better. Despite wanting to make her look less like a sonic clone, I miraculously managed to make her look MORE like one, and eventually like a SonAmy fanchild, though I remember vehemently being against that. I gave her blue hair the same color as her fur for a while but eventually just shifted to the idea of giving her quills and looked at Amy's and just kinda said "eh. Sure. Why not." I wanted to lean more into the fun Sonic-Character-Vibe which meant bright colors and a lack of detail! I didn't quite get it right though since I was, well, 11, and important aspects of character design weren't exactly in mind lol

oh god not the horrible contrast on the Same Exact Base

Eventually, again, I got SOME sense knocked into me and realized that this probably wasn't the best design. So I went for a more dramatic swap-up and stuck more to one color. I tested around with both the bright green and red, but ultimately stuck with the red. This was around 2014 when I got my first drawing tablet so sayonara MSPaint and DA bases! For this design I made Sam more sporty, gave her longer quills, and a little side ponytail to help give her a more unique silhouette (not that that was my conscious thought process at the time). Admittedly, I'm still very partial to this design simply because I stuck with it for so long! Most of my memories with this character until about 2018 are with this general design!

Main pic for her redesign made around 2014!

First fullbody pic of this new design from very early 2014 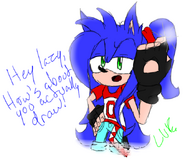 Sam courtesy of SigmaAlphaThree from I THINK 2014??? (apologies for putting ur old art here but I still love it dearly 😭) 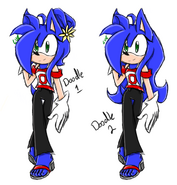 Not the main design but a cute doodle I still like

I dropped off of Sonic very abruptly though around late 2014-15 because of some personal things that had been brewing for a while. I was very much ignoring everything I'd done with the series until around the time the Villains Trailer for Sonic Forces dropped at E3 2017, then, hoo boy! SEGA grabbed me by the throat in a way I didn't think I'd get nabbed again. I slowly rekindled my love for the series and wanted to start over with a fresh coat of paint--mainly for Sam since she was my main OC. I kept some shapes from a redesign I attempted in 2015 but decided to completely change her color palette. I fiddled with pretty much every color for her under the sun, but ended up really liking how yellow meshed with the colors in her Zone Cop outfit since that's where her story had shifted towards around the time of the previous, more sporty design. 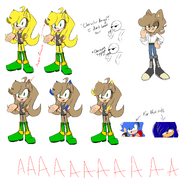 Figuring out the color dynamics of her fur. You can tell I was having a great time here

Testing out the light brown used in her dad's design!

Alternate palette for that 2018 doodle

Alternate version without the extreme lighting

So. It is now 2022. Where are we at? Well, in late 2018 I once again fell out of Sonic abruptly but this time it was bc I just hyperfixated on other series mainly. And now here I am. Not much has changed yet tbh but I haven't been back in the thick of it for very long. I have adjusted Sam's design again since I'm changing her story up again to start with Forces, and her design roughly reflects the outfit I made for her in Forces (bc yes ofc I had to play as her lol). I'd doodled her with cut/short quills a few times before but I really like it now! So I decided to just stick with it and make her quills and hair in general a bit more jagged and characteristic of a hedgehog than what it previously was. I'm really happy with this! Excited to see where she goes from here!

New design! Forces was so fun with its character customization!

Alt. Palette for the new design! I know this looks better aesthetically but I'm just so partial to the yellow now lol
Community content is available under CC-BY-SA unless otherwise noted.
Advertisement