Surge is a lion who lives in Mobius. He is part of S.P.O.M.(Secret Protecters of Mobius). He is an excellent computer hacker. He likes meeting new people and dating girls. He also knows a lot of people worldwide from his odd jobs given by S.P.O.M.. He has now harnessed new hologram powers and is able to create weapons from virtually nowhere. Surge sometimes has a tendency to have a bad temper but Nicole often helps him with this.

Not much is known about Surge's past.We only know 2 things.

All other information has been classified.

The N.S.S. is a group of star destroyers who set their sights on Mobius. Surge helped the Freedom Fighters drive them away for the time being.

(feel free to make pages for members of the N.S.S.)

Surge and NICOLE's relationship started when they first met. Surge thought NICOLE was attractive and clearly showed it in a mission against the N.S.S. NICOLE was about to be hurt by Aquarius and Surge went ballistic. He knocked Aquarius clear out of the area they were in. He then helped NICOLE up. Later that night, Surge attended a party in Castle Acorn(Sally's birthday.) About halfway through the party, Surge went outside on the balcony to get some air. NICOLE followed him. NICOLE asked Surge why he overreacted in the fight and if there was anything she could do to repay him. He told her he thought she was beautiful and asked if he could go on a date with her. NICOLE agreed. Their relationship only grew from there.

Surge talking about S.P.O.M.: "Ever been in a situation where everything seems hopeless and then, by a seemingly impossible miracle, you're fine? That's us."

Personality: Likeable, Loveable, Sophisticated, Serious When Needed, Laid Back, Funloving, Hotheaded (sometimes) Meeting Surge for the first times gives you a feeling that he is a very serious person, although this contradicts his real personality.

Surge's virtual guns are similar to guns in Call of Duty Modern Warfare 2. Their ammo content is similar to Julie-Su's gun however, and fire energy blasts.

Chaos Emeralds?: He only needs one to access his power: Catacalysmic Surge, in which one arm transforms into a Vulcan minigun and his other into a grenade launcher, his eyes also change from white to black.

Surge Belongs to [http://www.youtube.com/user/doggybag2355 doggybag2355.(but can be taken by Archie Comics)

Since Surge is 20 years old, he serves as a substitute teacher every now and then. He usually helps Lantis when she has problems.

One day while Surge was visiting Anti-Beta he noticed her cat, Kit-10. He asked Anti Beta if he could have one so she cloned him one with the same personality as Kit-10. However something went wrong with the cloning process and the new Kit-10 was about the same size as Surge. Surge didn't mind and took Big Kit-10 home and now he is Surge's and Beta's pet.

Leave a comment and your name if you have something to say :3

I love the drawing, who made it?

Surge the Lion: Pinkperil did the picture. Although the character design is my idea.

Red the hedgehog: I liek you r nicole and surge story...^.^

Echmina the Echidna: That's a lot of information, and a snazzy picture ^^ Good job!~

Here's the pic you requested, your welcome. Ouka-Noir (I stayed up really late to do it) 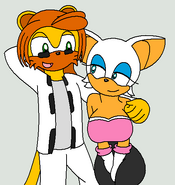 Surge is not impressed

Surge with an L86

Surge n Everyone too (reminds me of mojang logo) 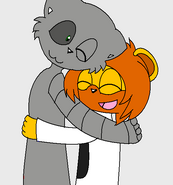 By Gamer
Community content is available under CC-BY-SA unless otherwise noted.
Advertisement