Tech is a bat who has an IQ of 298, but she can only use this IQ for electronics, in most other situations

such as trying to talk, some people might call her naive and childish. Her redesign is made by User:MissAquaAnime.

Tech is very childish, bashful, naive and innocent, being very socially awkward and making lots of mistakes despite her high IQ. Tech is very bubbly and friendly.

Tech is also very curious to find out about the Chaos Emeralds, such as where they came from, and how and why they got their power, which is why she made the Chaos Emerald Inspector Machine, to hopefully find out more about these mysterious powerful emeralds. She spends nearly all of her day studying on them, and hopes to find out something interesting and/or helpful about them. The shelves in her labratory/home are filled with books about the Chaos emerald's history and such, though she still has books about other scientific things.

Tech sees Sonic mostly as the "Hedgehog who saves the world", but she also appears to be a bit "lovestruck" over him, but not as much as Amy. She doesn't chase after him, flirt, force him to be her girlfriend at all like Amy does, but she always goes into a love trance whenever she sees Sonic, and will often accidentily call him things such as "Hot", "Cute", etc. when talking about him. Sonic seems to show a love for her back. One time he accidentily called Tech his girlfriend instead of his actual friend.

They became friends when Tails saw one of Tech's machines, the Chaos Emerald Inspector Machine, which Tech uses to study Chaos emeralds. Tails was seemingly impressed, and they shortly became friends.

Tech mostly just sees her as a Chaos emerald thief and another bat. Rouge often steals Tech's Chaos emeralds when she's not studying them, making Tech mad at her, making them (sort of?) rivals.

Despite Amy and Tech both having the same crush, they get along pretty well. In fact this just heightens their friendship - they can both agree that Sonic is hot, cute etc. However in Tech's mind she hates SonAmy shippers and if Amy and Sonic actually did become a couple (which they won't ._.) Tech would hate her guts. 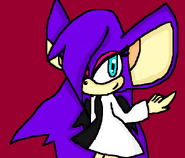 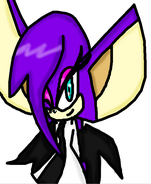 One of her most failed pics XD

TECH'S ONLY GOOD PIC THAT ISN'T A RECOLOR XD

Sonic Boom outfit, lineart and design by Sasha Gorasevic, coloring and shading by me :D (I'm still using this as her current Sonic Boom design)

Base by Celina8 on deviantART
Community content is available under CC-BY-SA unless otherwise noted.