Hello fellow passerby or member/friend. This page is too old and outdated! If you want to know the real info, please contact User: SonicKnucklesFan92 and you’ll have permission to see the official page.

Tobias had became cursed and was to absorb his clone and become him. He now roams the lands and goes for the kill, until he is completely satisfied with his mission

Hello, I am sonicknucklesfan92, the creator of Tobias the hedgehog. I’ve always been told over the years and countless times on different places that Tobias is/was a Mary Sue. I can assure that it is wrong. I’ve created Tobias to be an alien being able to adapt to his surroundings. The only reason why he looks as he does, because his dna was tampered with. Tobias like soraxess The Tainted one, are both are characters that are different and are creatures that took the form of a coexisting character, because of taking their abilities or were experimented on.

Tobias is an organism alien like machine, capable of evolution and go beyond that what it can do.

Sure I may have not explained it. But. Now seemed like the right time. If I still get the same results of being a Mary Sue or other things. Then people need to realize everything before jump to conclusions. Don’t judge a book by its cover.

(Due to many confusing actions.  Sonicknucklesfan92 decided to move all info off the wiki! however this page is for fan art and possible SFCW canon timelines within this wiki, have yet to come soon...) NOTE! If you are wanting to know Tobias fully, contact the creator for the official page!! 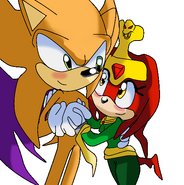 Tobias Fanart by others

by dash the turtle 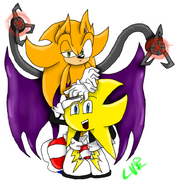 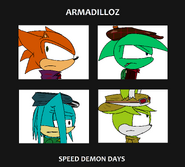 tobias and "crew" by- dash the turtle 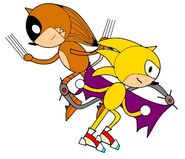 tobias and susan laughing together- fanart by susanthehedgehog16

Relationship with Other Characters

character realtionships from Sonic Fan Character Wiki, This is for other people who want their character to be friends / allies / enemies / rivals with him, this is not canon to his page however, but for rps and other uses on here are canon for this wiki:

On-screen appearance:  Tobias warps in by a special beam of light from the sky and he lands.

Neutral Attack- Left Jab (5%) Right Hook (6%) Rapid Kick (1-3%).  One of of good descent range of jabs as well of kicks. It has a great range, damage and hitstun, with it being a good neutral infinite.

Dash Attack-  running kick. a low attack, but it tilts up and down, making it up to 6% in combos. and easily shield grabbed.

Strong Side-  A quick spin kick like punch. a moderate- medium knockback, best used as a punisher out of shield . Can be angled up or down. 6%.

Strong Up-  A pretty fast scorpion kick that covers Tobias's back, though his whole body becomes a hitbox. Consists of three small, barely noticeable hits. 1st and 2nd hits do 3% each with little knockback, and third hit does 4% with moderate knockback, for a total of 10%. Little ending lag. This attack, though It easily chains into itself, which is good for damage racking, and can even lead into his Up-Smash or Grab. At higher percents, it sets up well for his aerials.

Strong Down- low sweep kick.  only strong enough when someone is close to tobias. making it  maxium of 9%

Side Smash - Short Laser on the ground. As with his other iterations with this move, moderate knockback. Best used near the edge, this move kills regularly above 130%, though lower scaling makes it weak at greater distances. At 30-60% damage, provided there is enough stage to work with, the low angle is just strong enough to cause reeling knockback, often making the opponent have to either bounce or tech off the stage, which Tobias can chase down and respond to.

Down Smash - Split kick/ Tentacle. Hits on both sides. A Down Smash with above average, low angle knockback and with decent range, which is 16%-20%.

Up Smash - A backflip kick. Very high knockback scaling. The attack is drastically weaker when the opponent is behind Tobias. KOs most characters at about 100% with strong vertical knockback and slight horizontal knockback. It's the strongest Up-Smash. It is considered Tobias's best finisher, as it has fast start-up, pretty good shield stun, and it is by far his strongest and best ranged attack, although its end lag is not as generous, and it leaves Tobias wide open if sidestepped or jumped over, especially against other fast fallers. 17%-25%.

Ledge attack - Pulls himself up into a sliding kick. This has a somewhat similar animation to his Forward Smash forward. 8% damage.

100% Ledge attack - Gets up slowly, then does an kick while a punch from his left tentacle. 8% damage.

Trip attack - Gets up and kicks on both sides with low range. 6% damage.

Neutral Aerial - Flying kick. Is a fast Kick. Fast start up and long hitbox duration but low knockback, mediocre range and abysmal shield stun make it almost guaranteed to be punished on shields, especially due to Tobias's jumping mechanics and high falling acceleration, since he has little maneuverability to create space after using it. Maximum of 9%.

Forward Aerial - Quintuple kick. Increases jump height and reduces falling speed while in effect, making it useful with recovery. Decent hitstun, medium vertical knockback and low aerial end lag, has juggle starting potential, and at higher percents can set up his Up Air, but is very awkward on grounded opponents, due to its hover effects and high landing lag. Also difficult to use on small characters. Can deal up to 23%.

Back Aerial - A slow though quite powerful back kick, with a low knockback angle. Dangerous near edges, though its slow speed and short duration can make it difficult to land. 15%.

Up Aerial - An upward punch tentacle with a follow-up kick. Hitting with the tentacle causes 5%, while the kick causes 11%. His best aerial for KOing. Can set up for juggles at mid percents, though this is situational, due to being awkward to use while falling.

Down Aerial - Drill kick. Does more damage the closer the opponent is to Tobias and can deal up to 21%. It is technically a Meteor Smash, but is hardly noticeable at lower percents due to its very weak power. Often the move of choice when Tobias needs to approach, its surprisingly high priority, multiple hitboxes, low landing lag and decent shield damage sets it apart from his other attacks. Goes well into his grab or Up-Tilt, but is not impossible to shield grab and several disjointed attacks,  will hit Tobias through it. At higher damages, near 100% and beyond, the attack causes enough flinching to combo an Up Smash, and if one of the hits causes tripping, since it is a Meteor Smash, several other attacks like Down Smash become possible.

Dash grab - Halts with one foot and grabs, somewhat predictable.

Pivot grab - Great as he can boost grab, and has a long grab range.

Pummel - Knees the opponent. 1% damage each.

Back Throw - Throws opponent backward and shoots them with his tentacle lasers. Can be avoided using DI. Up to 8% damage.

Up Throw - Throws opponent up and shoots them with his tentacles with two jabs and then laser. Can be avoided using DI. Up to 20% damage.

Down Throw - Slams opponent on the ground and shoots them three times with his Laser. 9% damage. Can be followed up with either a Forward Aerial at low percentages on certain characters, or an Up-Air on all characters.

up special-  flight and tentacle attack

Final Smash- Perfect Tobias with Oruto appearing in the background.

Down- He does a folding arm position while his tentacles look at the screen. a secret tuant in the Gunma Quadra stage. Tobias does a ristar battle pose.

Side- His metal tentacles open and close as he watches them before they go back into attack mode.

Tobias does a side pose with his metal tentacles standing straight

He attacks the screen twice with both tentacles while flying and landing. saying, "You need more training."

Tobias does a spiral kick and lands in his battle pose.

Tobias lands and looks at the screen and smiles.

Final smash- While Tobias transforms into Perfect Tobias as Oruto is seen in the background.  While tobias charges with energy to unleash a mega laser, he can attack  with his metal tentacles which is doubled in attack (20%).  While tobias's charges  Oruto is  making  stars appear in the backgound, and in the distance you can see the planets of the valdi system, once tobias unleashes his laser,  oruto is  glowing powerfully and once his final smash is done  he returns back to normal and she fades away.

Ristar appears beside tobias and start to  spin on his star poll and does his meteor strike which  attacks all enemies that are near or far, for a few seconds, after  ristar  lands he does a  victory pose next to tobias and fades away. Trophy Imformation:

Tobias is among the strongest and surpringing  fast in the character roster. his multi attacks are deadly, and his Laser attack can do some good damage if caught by surprise.

The Zeta Core  is where Tobias's home was in the depths of space, with many tanks and platforms, as if tobias had a ship. but once tobias does his final smash the tanks are destoryed and the Station looks destoryed. However the hallways are very alien like.  Its very unknown if this stage could be tobias's home and his origin.